EUTECT GmbH has refined its brush module for cleaning printed circuit boards. The module that was designed years ago has been improved and more effectively oriented in the framework of a further development process. With success. Ever since CEO Matthias Fehrenbach mentioned the brush module during a public company presentation, customer inquiries have greatly increased.

“We had rarely been involved with the cleaning of printed circuit boards, until one of our customers expressed the wish to integrate a brush module in his production cell. For this reason we developed a module years ago, which we included in our modular construction kit MBK as standard product”, stated the CEO of EUTECT GmbH. In the course of the further development of the modules, the brush module was also upgraded to the latest technical status. Fehrenbach himself mentioned this development in passing during his presentation at the Innovations Forum 2018 of the Konradin Verlag in Böblingen. “Afterwards I gave several interviews at our small trade fair booth, because apparently several electronics manufacturers were looking for just such a solution”, remembered Fehrenbach.

Key element of the cleaning process is a round brush, which is driven at a fixed speed by a DC motor. “The speed is thereby coordinated to the PCB and the contours”, explained Fehrenbach. The brush itself is a consumable, which is fixed by a thread. As a result a long-lasting, stable brush rotation is ensured. The entire brush module is mounted underneath the printed circuit board, on the floor of the production cell. By means of height control, the position of the brush as well as the brush wear is monitored. “The brush height is defined to the PCB, so that a deviation in height is attributable to brush wear. In that case, the ends of the brush are buckled or bent, similar to a heavily used toothbrush. In this case, efficient cleaning can no longer be guaranteed”, stated Fehrenbach.

The impurities are removed from the underside of the PCB by the brush and extracted at the same time. The particles of dirt are collected in a catch container. To prevent the electrostatic charging of the brush, the module is equipped with an ionization device with discharge head. The ionizing air current is thereby aimed at the brush. “According to customer requirements, we can adjust the rotation brush, the rotation spin as well as the speed. Consequently, we can adapt the brush module to the PCB contours of our customers”, declared Fehrenbach. 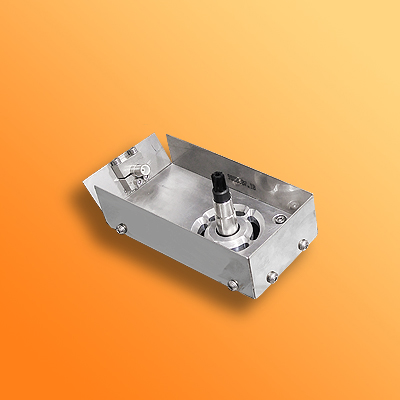