When standard machines have become obsolete and are taken out of service, they are often resold as used equipment. With customised machines this is a lot harder, as they are often configured too uniquely to be used for any other application. Eutect is now addressing this issue by recycling old systems and modules for new applications.

“We have decided to take systems built by us back instead of leaving them to the scrap metal dealer,” explains Matthias Fehrenbach, Managing Director of Eutect GmbH. The reasoning behind this decision is simple. Every system that Eutect supplies includes not only labour time but also material values that can be used for new projects. For example, the production cell, kinematic solutions but also soldering modules like solder nozzles, wire feeders or thermodes. “If these parts are still working, they can also be reused,” says Fehrenbach.

Eutect is currently converting a soldering system that has been used for years in the automotive supply industry. The machine still works and operates flawlessly, even if you look at the multi-shift operating time. But the traces of production are deceptive. The production cell is still in a stable, flawless condition and can be used for other machine concepts if the sustainability and cradle-to-cradle idea is applied. “This approach is based on a continuous and consistent recycling management,” Fehrenbach explains. The German chemist Michael Braungart and the US-American architect William McDonough came up with this approach, which is based on “cradle-to-cradle products” that can be continuously kept in technical lifecycles as “technical nutrients”.

After a general overhaul, the cell can be rewired, equipped with new modules and an updated control cabinet that is adapted to the new processes and thus made fit for new tasks. The wiring harnesses can no longer be used, but the soldering modules, robots or other kinematic systems integrated up to this point can be utilized in, for example, price-sensitive projects after being tested and overhauled. Some of the newly assembled machines are returning to the production cycle as rental machines. In addition to entire machines, Eutect also reworks individual modules. These are also thoroughly tested. After the reworking, the replacement of wear parts and an extensive functionality test, the modules are used for new projects or are first put into stock in order to be able to react quickly to inquiries. “We consider this approach to used systems to be important, because in times of scarce resources, climate change and an ever-increasing demand for sustainability, even as a small mechanical engineering company, we have to make our contribution,” confirms Fehrenbach. 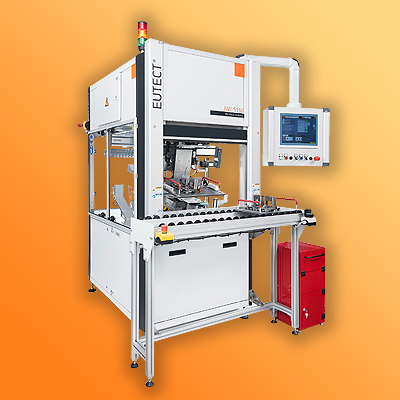