20During the 2nd half of 2019, one of the largest thermode soldering machines ever built by Eutect GmbH was delivered. It is the TL S270, which integrates five individual processes in line, including complete process monitoring. The system consists of various individual steps of solder paste application using a dispenser and thermode soldering.

“The TL S270 is a highly flexible soldering system that we built to specification of the customer. The aim was to link and monitor the individual steps within the unit”, explains Matthias Fehrenbach, Managing Director and owner of Eutect GmbH. With dimensions of 2.30 m x 4.80 m, the TL S270 is one of the largest integrated systems developed by the Swabian special machine manufacturer. A total of 2 dispensing and 3 thermode soldering processes have been integrated, which are used to solder a wide variety of different cables on to sensors.

The components are moved within the system via satellite workpiece carriers, which sit on a basic carrier. The assembly, on which sensors will be mounted in this application, is insert into the workpiece carriers. By using further small satellite carriers, which are manually placed, the to be soldered cables are placed and fixated in the correct position. The workpiece carrier then enters the system. In the first two steps, spindle valve dispensers apply solder paste to the assembly surfaces and the cable strands of the cable ends. In the following steps, these strands are then soldered using thermode soldering while monitoring temperature, force and path.

For the thermode soldering process, the developers at Eutect have integrated the latest version of the TL thermode soldering module, in which all process-relevant parameters can be defined. “This refers in particular to the contact pressure, sink path and temperature profile, which can be configured exactly for the process and according to the operator’s needs. We therefore offer the user much more than a controlled and monitored process. He gets a 100% coordinated and definable process,” says Fehrenbach. The three thermode soldering modules including X-Y-Z and rotary axis are each mounted on a highly intelligent linear axis. This results in a highly flexible, highly dynamic and very compact process implementation with integrated Kapton tape guide.

The contact pressure of the thermode is 1-60 N. The contact force is displayed and controlled in steps of 0.5 N. This contact pressure can be entered via the new visual control panel, depending on the application and materials. A leading and trailing fixation device secures the surfaces to be soldered. “Thanks to the application-optimized contact pressure and the likewise new hold-down device, we can optimize the cycle time up to a maximum of 70%, depending on the heat sink of the solder joints. In this project, we have provided our customer with cycle time savings of up to 20%,” Fehrenbach emphasizes. In addition, the sinking distance can be controlled. The sinking-in control is 1 µm, which is unique in the field of thermode soldering. “The sink path, which can be freely adjusted in µ, enables defined soldering gaps and thus the best possible intermetallic phase arrangements,” Fehrenbach explains the process advantages.  In addition, the temperature profile can also be regulated via the control panel and checked via redundant temperature measurement. The maximum thermode temperature is 450°C. Resistance measurements for monitoring the contact surfaces are also possible.

The TL S270 can be used in two different modes. “The workpiece is entered manually. After passing through the unit, the finished workpiece can be removed on the rear side or it can be returned to the input position on a conveyor located in the chassis, where the operator removes the workpiece,” explains Fehrenbach. In addition to these process-relevant modules, the TL S270 is equipped with further modules for process monitoring and transport protection. “The input and rear removal areas are equipped with monitors for process control and monitoring, which are attached to long arms. These arms allow the monitors to be used on all four sides of the large plant. In addition, the dispensing process is monitored with two cameras each, so we have installed another monitor only at the input area,” explains Matthias Schmid, project manager for the TL S270 implementation. To ensure smooth return transport of the workpiece carriers within the system, another conveyor belt was installed on the side of the unit. “This is used to transport the cable fixing carriers back in order to process assembly of the cables parallel to the actual soldering process, otherwise the unit would wait for the operator due to its optimized cycle time”, says Matthias Schmid, project manager of Eutect. 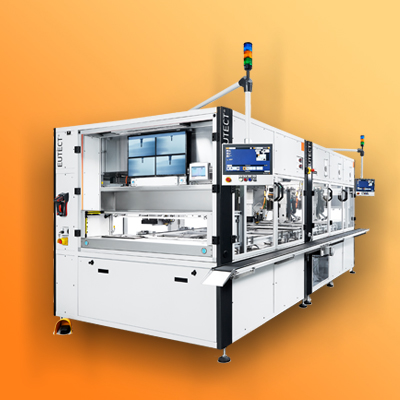