EUTECT GmbH is presenting a soldering system for fully automatic piston soldering at productronica 2019. This enables the integration of soldering irons from various suppliers. This soldering system is available with an automatic tip changer and an optional kinematic system. The overall concept is based on the new EUTECT automation platform Multiple Process Changer (MPC), featuring a collaborating robot system by German Robotics.

At the end of 2018, the Swabian soldering specialist integrated collaborating robots into its production cells for the first time and installed them at the customer’s site. The R&D team has now used this experience to develop the new MPC collaborative automation platform. The platform will be presented at productronica with a piston soldering head. The integration of other systems such as dispensers, screw- or placement tools and grippers into the MPC is also planned. “We see the MPC automation platform as a flexible solution that can be equipped with different tools for different applications as required by the customer,” says Fehrenbach, Managing Director of EUTECT GmbH. The use of different tools in one work process is also planned. “At the trade show, we will present the most straightforward application for us, the fully automatic, collaborating piston soldering. We will introduce further tool solutions in 2020 and thus expand and complete the MPC continuously”, Fehrenbach continues

The MPC KL (piston soldering) system, which will be presented at productronica 2019 for the first time, can be equipped with piston soldering systems from JBC or Hakko. The soldering iron is fixed to the arm of the robot, including the sensitive wire feeder (SWF). Robots, control systems and soldering irons are one machine unit. The complete system in the standard version consists of a rotary indexing table for manual component assembly and a safety cell surrounding the soldering process. Furthermore, a soldering tip holder is integrated in the process area for fully automatic changing of the soldering tips. The same applies to tip cleaning.

As an option, the rotary indexing table can be exchanged for a conveyor system. The soldering system can thus be used inline or loaded and unloaded via an assembly carrier. “We will be presenting the basic system at the trade show. All further adaptations to the customer process are possible, but are offered separately as a special service,” explains Fehrenbach. It is also possible to integrate the robot, with the associated solder heads and subsystems, into other EUTECT production cells. “With the system shown at the trade show, we are also interested in demonstrating the possibilities. We want to inspire customers to think outside the box.,” says Fehrenbach.

The robot used by EUTECT is a Panda from German Robotics equipped with torque sensors installed in all seven axes. This gives the panda seven degrees of flexibility. Thanks to the built-in sensors, the robot arm can also approach complex positions with the soldering iron and set soldering points with exceptional precision. The Panda is equipped with the most accurate contact detection and therefore stops immediately in the event of collisions and non-programmed impacts. “This is of course important for employee protection. But it also allows very precise soldering, as the robot works very carefully and precisely due to this degree of sensitivity. This is the only way to achieve reproducible results,” explains Fehrenbach.

Both EUTECT GmbH and German Robotics GmbH will be exhibiting their systems in hall A2, booth 540. 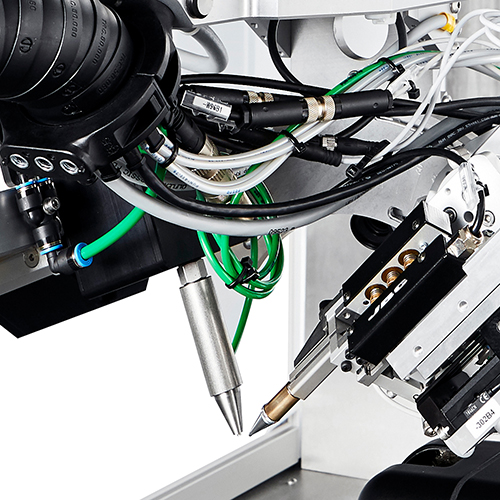